The Silent Age is an indie point-and-click adventure game by the Danish developer House on Fire. The story takes place in 1972 and centers on a character names Joe who works as a janitor in a company. One day Joe meets a strange man from the future and receives a device that enables him to travel back and forth between two realms– Joe’s current day in the 70’s and a post-apocalyptic version of his world. In order to solve the mystery and find answers Joe must toggle back between his realms to manipulate items and solve puzzles. 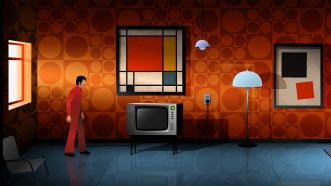 The Silent Age is visually stunning. The graphic style of the game is trendy and unique. The colors are vibrant and the characters are amusing. The narrative of the story is well written and is deeper than what is initially expected. By the end of the game all loose ends are met and you get an overall sense of understanding of how everything was brought together. I also found myself actually caring about Joe despite how short the game was.

The game is categorized as a ‘puzzle’ game but there weren’t really any puzzles per se. The game is purely dependent on item manipulation. I also think the overall difficulty of the game is not to my liking. For instance, at any given time you aren’t given more than 3 items (for the most part even only 2). Eventually it becomes very predictable where these items will be used. A more challenging experience would have been to either allow the gamer to carry more items making it difficult to decide what is to be used where or to limit it to few items but expand the area of exploration (similar to Thimbleweed Park). By the time I reached the last 4 or 5 chapters, I found myself getting bored. My motivation to continue was to find out what was going to happen.

For an indie game I think The Silent Age is decent. I would imagine the game isn’t best suited for Adventure game veterans though. For a lesser price, I would have thought the game is a must try.